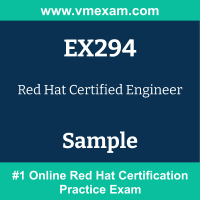 To test your knowledge and understanding of concepts with real-time scenario based Red Hat EX294 questions, we strongly recommend you to prepare and practice with Premium Red Hat RHCE Certification Practice Exam. The premium Red Hat RHCE certification practice exam helps you identify topics in which you are well prepared and topics in which you may need further training to achieving great score in actual Red Hat Certified Engineer (RHCE) exam.

01. After you set an SELinux context, the Linux restorecon command must be executed. How would you do this?
a) Use the command module to run the restorecon command.
b) Use the restorecon module.
c) Use the selinux module.
d) No further action is needed; this is done automatically when using the appropriate SELinux module.
02. You want to use the cron module to write the current time to a file. Which notation do you need to use?
(Choose two.)
a) job: echo rebooted at {{ ansible_facts[’date_time’][’time] }} >> /tmp/rebooted
b) job: echo rebooted at {{ ansible_date_time.time }} >> /tmp/rebooted
c) job: echo rebooted at $(date) >> /tmp/rebooted
d) job: echo rebooted at `date` >> /tmp/rebooted
03. Custom facts have different requirements. Which of the following is not one of them?
a) Custom facts must be stored on the managed host in the directory /etc/ansible/facts.d.
b) Custom fact files must be executable.
c) Custom facts are written in INI or JSON format.
d) Custom fact files must use the .fact extension.
04. Which statement about using YAML lists in playbooks is true?
a) Any module can use a YAML list to specify the names of items that need to be processed.
b) YAML lists can be used at a play level, not at a tasks level.
c) The service module does not support YAML lists to manage multiple servers.
d) A YAML list can be used to run multiple modules.
05. Each play must have at least three parameters in its header. Which of the following is not one of them?
a) hosts
b) tasks
c) name
d) become
06. What can you use to set a variable inside a task, based on discovered Ansible facts?
a) set
b) set_vars
c) vars
d) set_facts
07. Which argument must be used in the parted module to create GPT partitions?
a) label: gpt
b) type: gpt
c) table: gpt
d) state: gpt
08. How can the result of a command be used as a variable in Ansible?
a) Get it from Ansible facts.
b) Use the command_facts module.
c) Use the register parameter.
d) Redirect the standard output to a file and analyze that.
09. When using Ansible facts, what should you look for to get information about discovered disks?
a) ansible_disks
b) ansible_devices
c) ansible_mounts
d) ansible_device_links
10. In which role directory should you define role variables that are not supposed to be overwritten from a playbook?
a) vars
b) meta
c) files
d) defaults

Note: Please update us by writing an email on feedback@vmexam.com for any error in Red Hat Certified Engineer (RHCE) certification exam sample questions