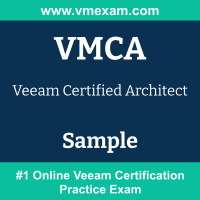 We have prepared Veeam Certified Architect (VMCA) certification sample questions to make you aware of actual exam properties. This sample question set provides you with information about the VMCA exam pattern, question formate, a difficulty level of questions and time required to answer each question. To get familiar with Veeam Certified Architect (VMCA) exam, we suggest you try our Sample Veeam VMCA Certification Practice Exam in simulated Veeam certification exam environment.

To test your knowledge and understanding of concepts with real-time scenario based Veeam VMCA questions, we strongly recommend you to prepare and practice with Premium Veeam VMCA Certification Practice Exam. The premium Veeam VMCA certification practice exam helps you identify topics in which you are well prepared and topics in which you may need further training to achieving great score in actual Veeam Certified Architect (VMCA) exam.

01. To be able to createbackups in a Hyper-V environment, you need several permissions to be able to properly snapshot and process a VM.
Which of the following permissions are not necessary for on-host backups, if used?
a) The account used for product installation must have the Local Administrator permissions on the target machine
b) Local Administrator permissions on the source Microsoft Hyper-V server
c) Root or equivalent permissions on the Linux backup repository
d) Full Access permission on the targetfolder and share
02. Veeam Backup & Replication provides detailed logging of performed activities data protection and disaster recovery tasks. In some cases the logging can even become a bottleneck for a proxy server.
How can you adjust the way Veeam Logging is handled to overcome this problem should it arise?
a) Set a lower level of the registrykey: VDDKLogLevel
b) Set a higher level of the registrykey: VDDKLogLevel
c) Set a shorter retention period for Job Session History
d) Give higher process priority to the Veeam LogAgent
03. When adding an ESXI host as managed server to the Veeam Console, which of the following statement(s) is/are best practice?
a) Best practice is to add the host with both the A record and PTR record
b) Best practice is to add the host using the FQDN
c) Best practice is to add the host using its IP address
04. Which report will help you identify VMs which have a high change rate at the block level?
a) Datastore growth estimation
b) VM Change rate estimation
c) Capacity Planning for Backup Repositories
d) Infrastructure overview
05. To protect VMware, Veeam reduces the amount of NBD (NFC) data transport connection to 7. How can you raise the number of NBD connections?
a) You raise the number of TCP connections in the Network Traffic Settings
b) You can add a registry key to Veeam to increase the amount of NBD connections
c) You cannot raise the number of NBD connections
d) NBD connections can be raised both in the GUI and in the Registry
06. Which mode is the preferred transport mode for VMware Virtual SAN (vSAN) configurations?
a) Direct NFS mode
b) Network Mode
c) Direct SAN mode
d) Virtual Appliance mode
07. What is the default location of the Veeam Log files?
a) C:\Users\Administrator\Documents\Veeam\Backup
b) C:\ProgramData\Veeam\Backup
c) C:\Logs\Veeam\Backup
d) C:\Program Files\Veeam\Backup
08. SQL Express server has limitations in it’s use causing you to upgrade to SQL standard or higher. When should you consider upgrading from SQL Express?
(Choose 2)
a) When you expect your database to grow over 10GB in size
b) When restoring to a ReFS filesystem
c) When using a distributed deployment
d) When you run 50 or more concurrent jobs
e) When using an advanced deployment
f) When you run more than 100 concurrent jobs, not when running less jobs
09. What are the sizing guidelines for the Veeam SQL server?
a) 1 CPU core and 4GB Ram per 10 concurrent jobs, rounded down
b) 2 CPU cores and 4GB RAM per 25 concurrent jobs, rounded up
c) 1 CPU core and 4GB Ram per 10 concurrent jobs, rounded up
d) 2 CPU cores and 4GB RAM per 25 concurrent jobs, rounded down
10. Convoituring, a car sharing company, is deploying a new Veeam Backup & Replication server to use in a POC. Which server OS is recommended to use in the POC?
a) CentOS 7
b) Any supported OS will do equally fine
c) Windows Server 2016
d) Windows Server 2012 R2
e) Windows Server 2008 R2 SP1

Note: Please update us by writing an email on feedback@vmexam.com for any error in Veeam Certified Architect (VMCA) certification exam sample questions