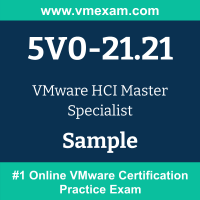 We have prepared VMware HCI Master Specialist (5V0-21.21) certification sample questions to make you aware of actual exam properties. This sample question set provides you with information about the HCI 2022 exam pattern, question formate, a difficulty level of questions and time required to answer each question. To get familiar with VMware Certified Master Specialist - HCI 2022 exam, we suggest you try our Sample VMware 5V0-21.21 Certification Practice Exam in simulated VMware certification exam environment.

To test your knowledge and understanding of concepts with real-time scenario based VMware 5V0-21.21 questions, we strongly recommend you to prepare and practice with Premium VMware HCI 2022 Certification Practice Exam. The premium VMware HCI 2022 certification practice exam helps you identify topics in which you are well prepared and topics in which you may need further training to achieving great score in actual VMware Certified Master Specialist - HCI 2022 exam.

01. An administrator has an absent capacity disk. Which action, if any, should the administrator take to resolve the problem?
a) Wait, and vSAN will rebuild it.
b) Replace the faulty disk.
c) Replace the faulty host.
d) Verify the host is not isolated.
02. Which two causes explain this behavior?
(Choose two.)
a) The cluster DRS threshold has been set to Aggressive
b) There is a vSAN node failure.
c) The vSAN Resync throttling is enabled.
d) The object repair timer value has been increased.
e) The vSAN policy protection level has changed from FIT=0 to FTT=1.
03. An architect is designing a vSAN cluster. Which storage controller option will yield optimal performance?
a) Hugh queue depth
b) Set caching to 50% read on the controller
c) Enable battery write-back caching
d) RAID 0
04. After a vSAN Witness Appliance network configuration, the vSAN administrator notices that vSAN traffic flows from vmk0 (Management Traffic) rather than vmk1 (vSAN Traffic). Which step should be taken to resolve this issue?
a) Configure vmk0 with IP address on the same range as that of vmk1
b) Tag the vmk0 for vSAN traffic.
c) Configure vmk1 with IP address on the different network than that of vmk0.
d) Tag the vmk1 for Witness traffic.
05. An architect is tasked to design a VMware Horizon Solution with vSAN. The architect needs to use a solution to host the user’s profile shares in a highly available manner, and it must be guest OS independent Which solution will match these requirements?
a) Cluster out of the box
b) Cluster in a box
c) NFS on vSAN
d) iSCSI on vSAN
06. During a planning session for new vSAN clusters in multiple data centers, the customer relayed the following information:
– Highest possible mitigation during a host failure in terms of capacity.
– A constraint in this year’s IT budget.
What should the architect recommend?
a) Enable operations reserve. A minimum cluster of 3 vSAN nodes.
b) Enable host build reserve. A minimum cluster of 4 vSAN nodes.
c) Enable performance services. A minimum cluster of 6 vSAN nodes.
d) Enable IOInsight Metrics. A minimum cluster of 2 vSAN ROBO nodes.
07. A 30-minute power maintenance window has been approved on Sunday. Due to a delay, the maintenance took 20 minutes longer to finish. During this time, the vSAN administrator noticed that one of the clusters nodes was affected by a power shortage, as it was connected to an affected power source.
The default vSAN storage policy has been applied. What will be the status of the vSAN objects on the affected host immediately after it is recovered?
a) The cluster will be partitioned and the vSAN host will need to be rejoined.
b) All objects will remain accessible
c) A rebuild of the affected objects will occur.
d) All objects on the affected host will be lost.
08. In a stretched vSAN cluster, how is Read Locality established after fail over to the secondary site?
a) 100% of the reads comes from vSAN hosts on the local site
b) 50% of the reads comes from vSAN hosts on the local site
c) 100% of the reads comes from vSAN hosts on the remote site
d) 50% of the reads comes from vSAN hosts on the remote site
09. An architect is working with vSAN and setting the fault domains to support FTT=1. How many fault domains will be needed?
a) 2
b) 3
c) 4
d) 1
10. Upon checking the latency goal under vSAN performance diagnostics, the vSAN Administrator sees this message displayed: The increase in latency in the vSAN stack might be beyond expected limits.
Which two root causes can be identified to help remediate the issue?
(Choose two.)
a) vSAN VMKemel portgroup is configured with the “Route based on IP hash” teaming policy
b) vSAN encryption is enabled
c) Large packet losses and retransmissions on the network layer
d) Incorrect sizing of the disk groups capacity disks
e) One or more disk groups are congested

Note: Please update us by writing an email on feedback@vmexam.com for any error in VMware Certified Master Specialist - HCI 2022 certification exam sample questions