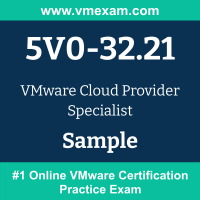 01. An administrator is trying to add a new Provider VDC and wants to consume the vSphere storage policy immediately. Which action should the System Administrator take next?
a) Under Resources -> Disable, and then Enable the vCenter Server instance.
b) Under Resources -> Infrastructure Resources, click “Update” for the vCenter Server instance.
c) Under Resources -> Infrastructure Resources, click “Refresh Policies” for the vCenter Server instance.
d) Under Resources -> Infrastructure Resources, click “Reconnect” for the vCenter Server instance.
02. A cloud provider wants to adopt VMware Cloud Foundation for management and resource clusters and is planning on having separate management and user workload domains. Which architecture achieves this goal?
a) Multi-instance Management
b) Standard
c) Stretched
d) Consolidated
03. Which VMware Cloud Director constructs are available in an Organization?
a) Datastores, Storage Policy, Resource Pools, VM Placement Policy
b) Extensibility, Licensing, Public Addresses, vSphere Services
c) Leases, Policies, Quotas, Catalogs
d) Network Pools, External Networks, Cloud Director Cell
04. An administrator is planning a new VMware Cloud Director deployment and is concerned about secure communications between the clients and servers. Which two recommended steps would ensure secure communications between the clients and servers?
(Choose two.)
a) VMware Cloud Director automatically creates self-signed certificates.
b) Create a single certificate for each member of the server group, and import the certificates into the host keystores.
c) Create two certificates for the server group, and import the certificates into each cell’s keystore.
d) Create a single certificate and upload it through the Service Provider Portal to all members of the server group.
e) Create or use an existing wildcard certificate, and import it into each cell’s keystore.
05. Having just deployed VMware Cloud Director, a service provider needs to create Provider Virtual Data Centers so their tenants can consume cloud resources through their Organization Virtual Data Centers. Which two options can be used to create Provider VDCs?
(Choose two.)
a) Service Provider Admin Portal
b) vSphere Client
c) Tenant Admin Portal
d) Operations Manager Portal
e) vCloud API
06. The runtime lease of a virtual machine is about to expire. The administrator would like to extend the lease time. Which action should be taken to complete this task?
a) Renew the lease from the vApp action menu.
b) Extend the storage lease, and runtime will automatically be extended.
c) Use the /api/renewlease endpoint to define a new lease time.
d) Renew the VM lease only after renewing the vApp lease.
07. In which two ways can a vApp be built using the VMware Cloud Director tenant portal?
(Choose two.)
a) By importing a vApp using a VMDK
b) By creating a vApp from a vApp template
c) By creating a vApp from an ISO image
d) By creating a vApp from catalog
e) By importing a vApp from vCenter Server as a vApp
08. Which two steps are mandatory before upgrading VMware Cloud Director appliances from 10.1 to 10.2?
(Choose two.)
a) Take a snapshot of the entire VCD appliances cluster.
b) Take a snapshot of the primary VCD appliance.
c) Take a snapshot of the standby VCD appliance.
d) Change the database failover from Manual to Automatic.
e) Change the database failover from Automatic to Manual.
09. On which type of network in VMware Cloud Director can fence mode be enabled?
a) Isolated vApp Network
b) Direct vApp Network
c) External Network
d) Routed vApp Network
10. What is the function of vCloud Usage Meter Billing Categories?
a) To indicate which licensing belongs to individual tenants
b) To indicate which VCPP bundle has been detected
c) To indicate which license keys are billable
d) To indicate if consumption is based on vRAM or per OSI/VM

Note: Please update us by writing an email on feedback@vmexam.com for any error in VMware Certified Specialist - Cloud Provider 2022 certification exam sample questions