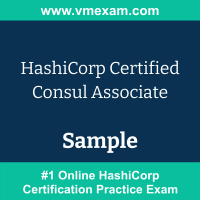 To test your knowledge and understanding of concepts with real-time scenario based questions, we strongly recommend you to prepare and practice with Premium HashiCorp Consul Associate Certification Practice Exam. The premium certification practice exam helps you identify topics in which you are well prepared and topics in which you may need further training to achieving great score in actual HashiCorp Certified - Consul Associate exam.

01. During leadership election, which members in the local datacenter get a vote to elect a new leader?
a) Consul clients
b) Consul servers and clients
c) Consul server nodes
d) Consul servers, read-only server nodes, and clients
02. After enabling Consul ACLs, what are two ways that you can supply the token when executing a Consul command on the CLI?
(Select two)
a) set the Consul ACL token using the consul operator token command
b) append the flag -token at the of each command
c) configure the token in the configuration file
d) set the environment variable CONSUL_HTTP_TOKEN
03. Scenario: You currently have services in your environment which grab configuration data from Consul's KV store upon initial deployment. However, you often need to make changes to these values depending on changes to your environment. You want to automate the update to the configuration file with the new values and reload the application so the new settings take effect.
From the answers below, what integrated feature can be used to achieve this?
a) schedule a rolling restart of the services depending on the expected schedule of changes
b) use a third-party monitoring solution to alert the development team of changes to the KV so they can restart the services
c) use consul-template as a daemon and configure it to update the desired configuration files
d) tail the log file and watch for changes to the specific key/value - execute an external script to make the changes
04. What command can be used for new Consul agents to become a member of an existing cluster?
a) consul cluster -join
b) consul connect
c) consul exec -join
d) consul join
05. Your security team has established company policies that require encryption keys to be rotated at least once a year for all applicable systems. Consul has been identified as an affected system, and the encryption key for gossip must be rotated across the entire environment.
However, you have multiple Consul clusters, each consisting of five Consul nodes and hundreds of services registered with Consul, each of which has the gossip key explicitly written to the configuration file.
What built-in Consul feature allows you to distribute a new encryption key to all the servers and nodes and remove the old one?
a) use the consul keyring command
b) use consul maint command
c) use consul exec command
d) use the consul keygen command
06. Scenario: You are storing configuration settings for your application in Consul's K/V store, and each setting is critical to the successful implementation of the application. A developer recently updated the value for app1, causing the deployment to fail.
What Consul feature can be used to monitor the K/V store for updates and automatically take action to remediate the issue?
a) use the raft consensus protocol to replicate the changes from the other nodes when a value is changed
b) set up health checks to monitor for changes to the K/V store
c) configure a watch and execute a script to update the application
d) set up an ACL to automatically restart the Consul service when a value is changed
07. What are the benefits of using the Consul Enterprise feature of adding non-voting servers in a redundancy zone to your Consul datacenter?
Choose two correct answers.
a) Read-scalability
b) Redundancy
c) Increase quorum
d) Segment your network
e) Disaster recovery
08. Based on the configuration file below, what datacenter will the Consul agent join once the Consul service has started?
{
"server": false,
"node_name": "web-dc-1",
"datacenter": "us-east-1",
"data_dir": "/opt/consul/data",
"bind_addr": "10.0.41.95",
"client_addr": "10.0.41.95",
"retry_join": ["provider=aws tag_key=consul tag_value=true"],
"log_level": "INFO",
"enable_syslog": true,
}
a) web-dc-1
b) us-east-1
c) consul
d) aws
09. In the Enterprise offering of Consul, a server agent can be either a voting or non-voting member of the cluster.
Select the statements below that are true in regards to a non-voting member.
(select three)
a) a non-voting member still receives replicated data
b) a non-voting member does not participate in the Raft quorum
c) a non-voting member can be automatically promoted to a voting member
d) a non-voting member does not receive replicated data
e) a non-voting member participates in the Raft quorum
f) a non-voting member cannot be automatically promoted to a voting member
10. Which protocol(s) need to be enabled in your network configuration to permit the nodes to communicate over the gossip protocol?
a) TCP and UDP
b) gRPC
c) SSL
d) HTTP and HTTPS
e) All of the above

Note: Please update us by writing an email on feedback@vmexam.com for any error in HashiCorp Certified - Consul Associate certification exam sample questions