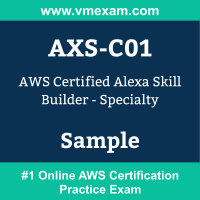 01. An Alexa skill builder has selected a skill invocation name "cat and dog facts." Why is this an invalid skill invocation name?
a) It has too many characters.
b) It contains more than three syllables.
c) It contains the connecting word "and."
d) It is grammatically incorrect.
02. To which of the following Amazon Alexa requests can an outputSpeech object be returned?
(Select TWO.)
a) IntentRequest
b) SessionEndedRequest
c) Display.ElementSelected
d) PlaybackController.NextCommandIssued
e) AudioPlayer.PlaybackStarted
03. An Alexa skill builder is debugging an AWS Lambda function using console.log() statements to inspect values in requests.
How will the log statements be made available to the builder?
a) The log files will be saved in Amazon CloudWatch Logs.
b) A card will be created in the Amazon Alexa app containing the output.
c) The messages will be available in the console when using ask simulate --debug.
d) The messages will be spoken as part of the Amazon Alexa output.
04. An Alexa skill builder is writing a skill that needs to play short MP3 files using the SSML audio tag.
Which AWS service provides the MOST highly available and scalable solution to host the MP3 files?
a) Store the files in an Amazon S3 bucket.
b) Store the files on an Amazon EC2 instance.
c) Store the files in an Amazon DynamoDB table.
d) Store the files in Amazon ElastiCache.
05. The following JSON defines a custom slot type named MEDIA_TYPE with two values:
{
"types": [
{
"name": "MEDIA_TYPE",
"values": [
{
"id": "SONG",
"name": {
"value": "song",
"synonyms": ["tune","single","track"]
}
},
{
"id": "ALBUMS",
"name": {
"value": "album",
"synonyms": ["record","lp","cd"]
}
}
]
}
]
}
Assuming that when a user says "change the record," an intent is matched, and the MEDIA_TYPE slot is populated, identify the canonical value that will be returned.
a) ALBUMS
b) album
c) record
d) song
06. A skill to search for local businesses returns the following output in the response:
<speak>I’ve found <emphasis level=”strong”>Bananas & Bears</emphasis></speak>
In testing, the Alexa skill builder notices the skill keeps failing and reviews the logs in Amazon CloudWatch and finds the following error:
"error": {
"type": "INVALID_RESPONSE" ,
"message": "Invalid SSML Output Speech for requestId amzn1.echoapi.request.afb31745-05ad-400e-8703-3a. Error: Fatal error occurred when processing SSML content. This usually happens when the SSML is not well formed. Error: Unexpected character ' ' (code 32) (missing name?)\n at [row,col {unknown-source}]: [1,101]"
}
What is wrong with the <speak> response?
a) <emphasis> should be <say-as>.
b) The entire string needs to be in quotes.
c) The apostrophe in "I've" should be removed.
d) There is an ampersand (&) in the text.
07. What is required for a skill to support multi-turn conversations?
a) The skill must have slots marked "required" with prompt text.
b) The skill must respond to the user by asking a follow-up question.
c) The skill must define session attributes to store the questions and responses.
d) The skill must return shouldEndSession=false in a response.
08. An Alexa skill builder is creating a podcast skill using the ASK SDK and AWS Lambda. The builder wants the skill to launch differently depending on where the user is in the podcast: midway, completed, or at the beginning.
Which type of attribute should be used to store the resume point across skill invocations?
a) Persistence attribute
b) User attribute
c) Session attribute
d) Device attribute
09. When configuring account linking for an Amazon Alexa skill using Login with Amazon, which of the following example scopes should an Alexa skill builder use to avoid exposing personally identifiable information (PII)?
a) profile:emai
b) profile:user_id
c) profile
d) profile:name
10. An Alexa skill builder is developing a skill that enables users to get information about train connections between two cities.
The skill's invocation name is "train finder" and the main intent for searching connections has the following sample utterances:
"trains between {cityA} and {cityB}"
"connections between {cityA} and {cityB}"
"how do I go from {cityA} to {cityB}"
"when is the next train from {cityA} to {cityB}"
Which example phrases would pass the certification process?
(Select TWO.)
a) "Alexa, how can I go from Manchester to London"
b) "Alexa, ask train finder for connections from Manchester to London"
c) "Alexa, ask train finder when is the next train from London to Manchester"
d) "How do I go from Manchester to London"
e) "Alexa, ask train finder what are the trains between London and Manchester"